Recall from US: Cipla arm recalls multiple lots of antidepressant drug from US 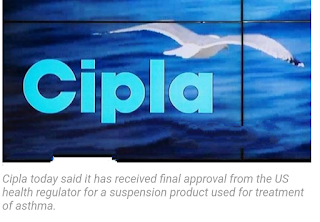 recalling 11 lots of antidepressant bupropion HCl extended-release tablets from the US market due to failed dissolution specifications, latest enforcement report of the US health regulator has said.


InvaGen Pharmaceuticals Inc is recalling four lots of bupropion HCl extended-release tablets USP (SR) in the strength of 100 mg, United States Food and Drug Administration (USFDA) said in an enforcement report.
The company is also recalling seven lots of the tablets in the strength of 150 mg, it added.
The report, however, did not mention the quantity of the product.
The ongoing nationwide voluntary recall for both the strengths is on account of "failed dissolution specifications; during stability testing," it added.
The recalls are a class III recall, the regulator said.
As per the USFDA, a class III recall is initiated in a situation, "in which use of, or exposure to, a violative product is not likely to cause adverse health consequences." AKT SBT SBT
Tags: FDA Audit Updates Pharma news
Newer Post Older Post Home